Why BitMEX is Back Under Scrutiny Following Bitcoin’s Rejection at $10.4k


Following Bitcoin’s brutal dump at $10.4k, the inquest into what went wrong is taking place now.

Theories regarding whale manipulation consistently make the rounds during such times. But a more tangible explanation alleges that manipulation at derivatives trading platform, BitMEX contributed heavily to the losses sustained yesterday.

While the likes of Binance and Huobi bottomed out at around $9.4k, BitMEX, who is currently facing a class-action lawsuit on the grounds of racketeering and fraud, dropped as low as $8.6k.

I did not round those numbers. pic.twitter.com/UIm4lWPBeq

Before yesterday’s dump, crypto markets were looking on the up and up. However, in what should be a familiar situation by now, the price of Bitcoin suddenly took another dive as it approached the $10.4k level.

This saw Bitcoin fall 10% in 15 minutes during the sell-off. Although volatility and Bitcoin are closely associated, many observers are suspicious of the speed at which the dump happened.

What’s more, analysis of the price chart shows that the same thing has occurred on two previous occasions. First, in mid-October 2019, where the uptrend touched $10.4k, which was followed by a dump that bottomed out at $6.5k some five weeks later.

And again, in February 2020, where the uptrend reached $10.4k, before crashing to $3.9k in what is now referred to as Black Thursday. This was largely attributed to liquidations as a result of the stock market crashing under pandemic panic.

If history is to repeat, then expectations are that the coming weeks will see a continuation of further price drops.

BitMEX Under the Spotlight

Technical analysis shows that for over half a year now, $10.4k is a resistance level that sellers have fought hard to keep.

Analysis of yesterday’s move, using smaller time frames, shows the infamous Bart pattern within the charts. Incidentally, this is not a pattern often seen in stocks or FX, it remains relatively exclusive to crypto.

Some say that this alone is evidence of the more candid manipulation that goes on within crypto markets, which is not something that occurs in the highly regulated stock and FX markets. 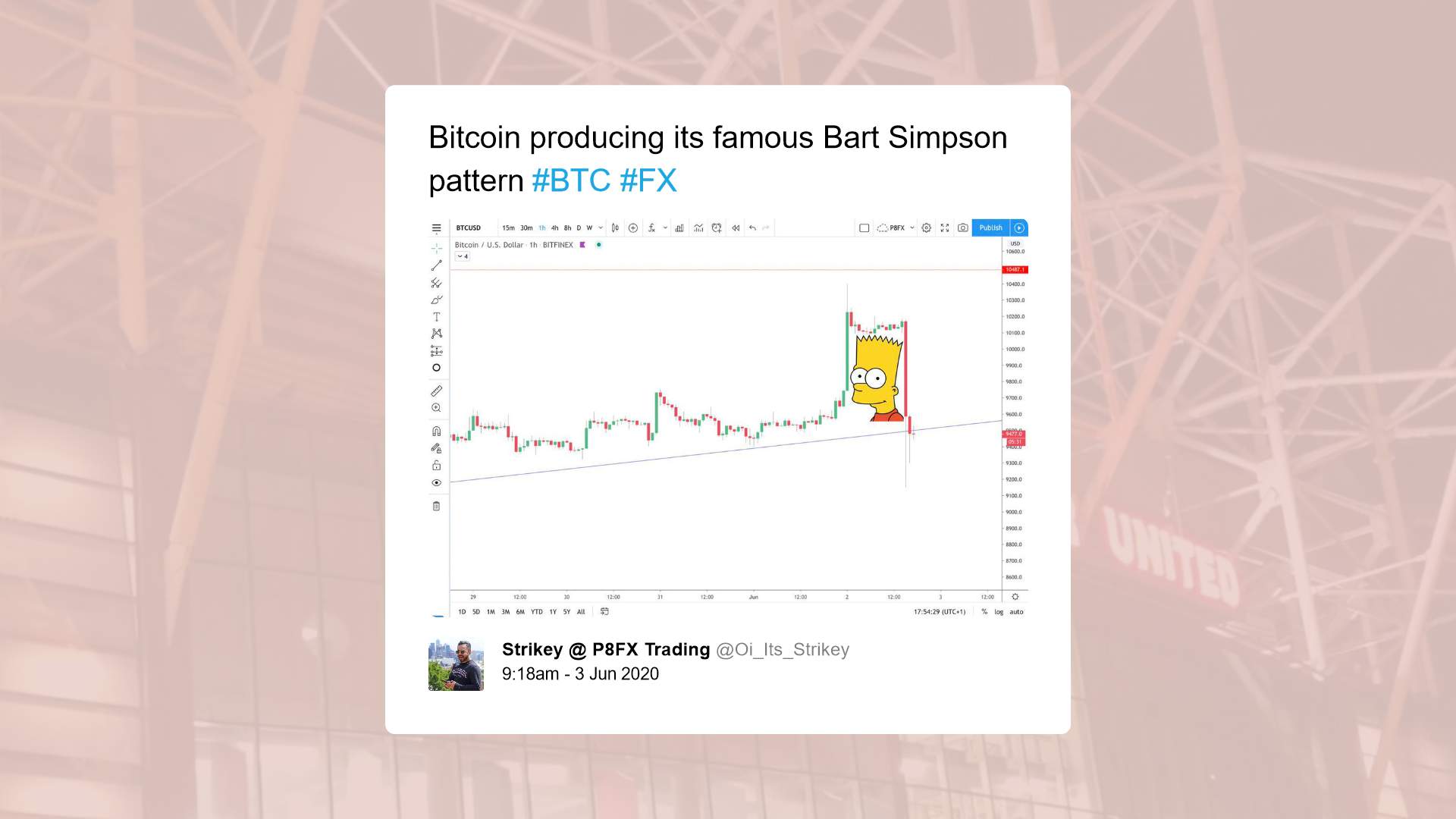 While it’s a fruitless endeavor to speculate who is manipulating Bitcoin, and for what purpose, an examination of exchange prices during the drop highlights BitMEX as an outlier.

As previously mentioned, the price of Bitcoin fell much more on BitMEX than it did on other exchanges, thus taking out more longs with the move.

Even so, long or short, it doesn’t really matter. As pointed out by @cryptowhale, huge run-ups followed by huge sell-offs, as witnessed over the past few days, add up to sweet profits for the exchanges either way.

These “Bart Patterns” are very profitable for exchanges!

This is why leverage trading isn’t recommended for beginner investors. The exchanges profit ALOT from greed/fear. pic.twitter.com/Y8PZTxAvMU

With that, Dr. Doom Nouriel Roubini once said that “degenerate gamblers” who leverage x100 positions deserve to lose their money.

All the same, yesterday’s “scam wick” on BitMEX has only added fuel to allegations they are making more profit than they are due.

In response to the lawsuit filed against them, BitMEX claimed that the case has no grounding in that the plaintiff has form with targeting crypto companies.

Litecoin May Have Bottomed And Is Ready To...